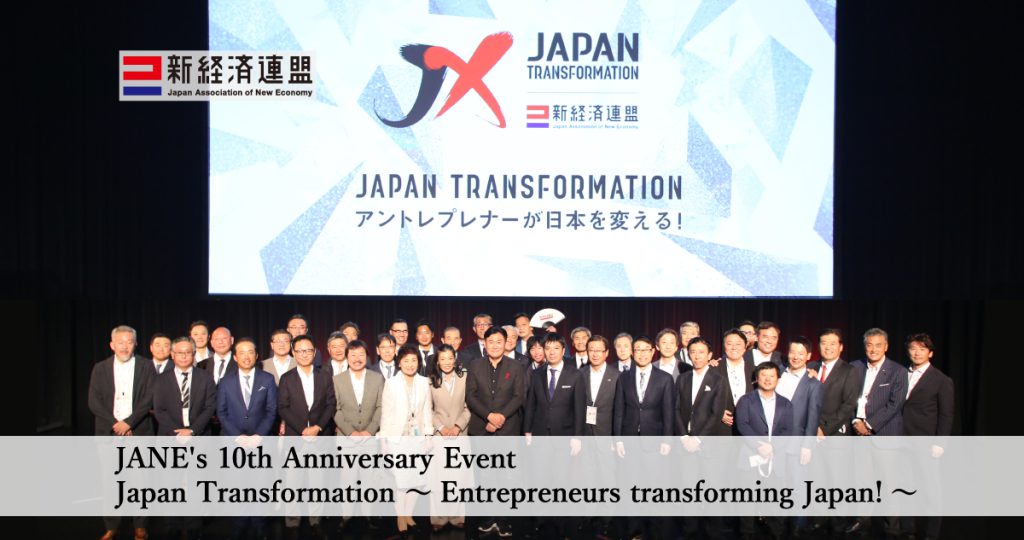 On June 1, 2022, Japan Association of New Economy (JANE) celebrated the 10th anniversary event, Japan Transformation ～Entrepreneurs transforming Japan!～. The event was attended by more than 500 guests, including JANE member companies, sponsor companies, diet members, and representative from ministries and embassies visited the venue. Thank you all for attending the event!

The event was organized in two parts. The first part started with a video of looking back on our challenges and achievements over the last 10 years. With the message “It’s time for Japan to open up again. And this time we’re doing it ourselves.”, Representative Director, Mickey Mikitani and Vice Representative Director, Susumu Fujita showed up on the stage. Both looked back on the JANE’s history, and introduced the 10th anniversary commemorative book released on this day.
Congratulatory speeches were made from Prime Minister Fumio Kishida (read by MC), and Minister for Digital Minister in charge of Administrative Reform Minister of State for Regulatory Reform, Karen Makishima. Also, video messages were sent from H.E. Rahm Emanuel, Ambassador of the United States of America to Japan, and Chair & Co-CEO of Salesforce Marc Benioff. Prime Minister Kishida described JANE’s challenges as “not to be afraid to argue, persistently insists on the path of belief, and pushes toward realization” and evaluated JANE as “a proof of being an entrepreneurial economic organization.”
Award ceremony of “JX Awards”, which is an award to promote and praise entrepreneurs established to commemorate the 10th anniversary, was also held. The selection committee presented trophies to the three winners, Eiko Hashiba, CEO of VisasQ, Toru Nishikawa, CEO of Preferred Networks, who were awarded as special prize from the selection committee, and  Yohei Kiguchi, CEO of ENECHANGE, who was awarded as grand prize. At the following talk session by the three winners, they talked about the joy of receiving the award as well as their management philosophy and goals.
Two talk sessions also were held under the theme of “female entrepreneur” and “student entrepreneur”, which are the themes that JANE will focus on in the future.  The speakers frankly discussed about “What JANE should work on.”

The second part of the event was a large-scale networking party. Started with a toast by Director Noboru Hachimine (Founder & Chairman, Digital Holdings, Inc), JANE presented the “JANE Awards” to 72 companies to praise a 10-year continuous membership to celebrate their paths waking together with JANE for the past 10 years. In addition, in cooperation with a member company LDH JAPAN Inc., wonderful performers, THE RAMPAGE, a 16-member dance and vocal group, DJ IZOH, and EXILE MAKIDAI shook the house.

JANE will continue to promote various activities to realize “Japan Transformation” together with member companies and other related parties.

Click here for archiving video of our 10th Anniversary Event