English abridged version of the proposal document is downloadable here

The original proposal document in Japanese is available here 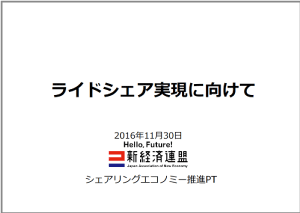 1. Title
Towards the Introduction of Ride Sharing

2. Background to the proposal
JANE published a policy proposal on home and ride share issues in October 2015. Among the suggested measures put forward in the proposal, there has been some progress in the area of home sharing, whereas ride sharing has not even been taken up for discussion in the government. Thus JANE put together its arguments to present once again detailed measures for the promotion of ride sharing

3. Arguments
(1) Why is ride share necessary in Japan?
・Global ride share market is expanding, giving birth to a number of unicorn startups, whereas a potential for this growth industry has been neglected in Japan.
・Japan is lagging behind other countries in accumulating ride share-related driving logs and other essential data, even though the contemporary era means that power belongs to those who control information.
・Ride sharing can contribute to the enhancement of consumer convenience and the promotion of workstyle change
・The idea of “smart city” can be realized through the introduction of MaaS (Mobility as a Service*), the concept of one-stop mobility service integrating different transport options including ride sharing
*A concept originating in Scandinavia, MaaS is becoming a global trend, with a number of projects in progress in the US and in other countries.
・There are issues that can best be addressed through the sharing economy’s flexible provision of service. These include mobility problems in areas with the shortage of public transport, and the demand-supply imbalance of conventional taxis.

(3) Counter arguments to the government’s negative views on the first policy proposal presented by JANE
・JANE proposes a ride sharing system where obligations are also assigned to platform operators for ensuring certain level of standard to guarantee ride safety, so that drivers are not expected to be the sole bearer of responsibility.
・It is said that taxis are in oversupply, but conventional taxis are not suited to cope with sudden and temporary demand spikes. The increasing number of ageing taxi drivers means that there will be serious shortage of drivers in the near future.
・Safety concerns and oppositions about ride sharing are being raised worldwide. JANE’s guideline proposal is aimed to address such concerns by suggesting detailed measures to ensure the safety of service. The Government stance of refusing to put the issue on the agenda is a hindrance to innovation

(4) Conclusion (Request to the government)
Swiftly set up a council within the government to consider regulatory frameworks for ride sharing.