[Proposal] JANE submitted a proposal on “venture philanthropy and social impact investment” to the government.

[Proposal] JANE submitted a proposal on “venture philanthropy and social impact investment” to the government.

Link to the proposal (English version) 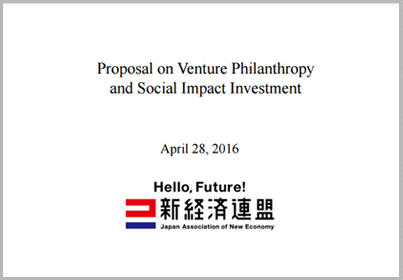 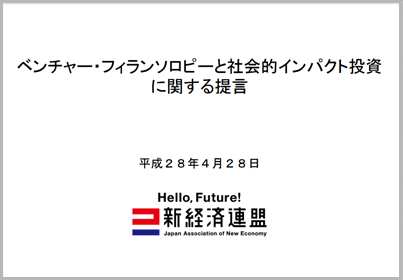 (Overview of the proposal)
1.Background
Role of social business has been growing rapidly in addressing social issues in areas that the government cannot reach. In Japan, however, the number of individuals and companies involved in donations or investment financing is tremendously lower than that in the United States.

2.Philanthropy eco-system
In the United States, many individuals and organizations including successful Silicon Valley entrepreneurs, celebrities, regional celebrities, and corporations are involved in venture philanthropy and social impact investing. This generates “philanthropy eco-system” – a cycle of giving back the gains of business to society, efficiently distributing funds to projects aimed at solving social issues, and creating new markets and employment opportunities such as social business. Establishing this cycle in Japan is essential, especially from the perspective of bringing about a virtuous cycle of growth and distribution (new distribution in order to grow).