[Proposal] JANE submitted a proposal to the government regarding legislative measures to advance the sharing economy.

On October 30th 2015, Japan Association of New Economy (JANE) submitted a proposal “Detailed Proposal on Legislative Measures to Advance the Sharing Economy” to the government addressed to Chief Cabinet Secretary, Minister of Health, Labour and Welfare, Minister of Land, Infrastructure, Transport and Tourism, Minister of State for Regulatory Reform, and Minister in Charge of Information Technology Policy. The proposal was made based on the discussion at the JANE Task Force on Sharing Economy Promotion (Leader: Takashi Inoue, President & CEO, Next Co., Ltd).

Link to the proposal (English version) 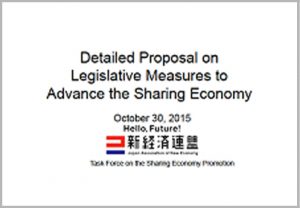 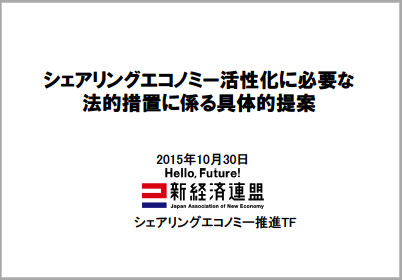 (Overview of the proposal)
The proposal contains legislative measures to be taken to promote sharing economy, which has been a growing global trend of new economy. In the proposal, JANE focuses on “home-sharing” and “ride-sharing”.

Home sharing will give rise to an economic impact in the range of 10 trillion yen in total in Japan, including through its effect on inbound consumption. In addition, home sharing is anticipated to resolve various issues Japan is facing. (e.g. enhance entrepreneurship among the public, issues related to vacant property, regional revitalization, the dynamic engagement of all citizens, the realization of Japan as a tourism-oriented country, etc.)

Ride sharing will give rise to an economic impact of at least more than 3.8 trillion yen in Japan. It will ensure mobility in regions lacking means of transportation, enhance entrepreneurship among the public, the realization of Japan as a tourism-oriented country etc.

In the proposal JANE proposes that home sharing hosts and ride sharing drivers not be subjected to the related Acts. Nonetheless, JANE proposes to set appropriate rules as there are some controversial issues such as ensuring security at shared home.

For details, please see the proposal.