Mr. McHugh served as the Secretary of the U.S. Army from 2009 to 2015 and as a Member of Congress from 1993 to 2009, serving the entire time on the House Armed Services Committee. He has deep experience in the areas of national security, foreign affairs and health care. During his time in Congress, Mr. McHugh also spearheaded legislation that significantly reformed the U.S. Postal Service.

Mr. Gordon served as a Member of Congress from January 1985 to 2011. Throughout his political career, Mr. Gordon led the debate on a wide range of technology issues and formulated legislative initiatives on a number of other subjects, including health information technology, nuclear power, rare earth minerals, and synthetic biotechnology. He served as a Chairman of the Science and Technology Committee from 2007 to 2010.

After welcoming remarks by Mr. Hirai, Secretary McHugh and Congressman Gordon provided bi-partisan and unique insights into the U.S. political and policy landscape based on their 50-plus years of combined service in the federal government. Secretary McHugh and Congressman Gordon discussed the results of the 2016 U.S. Presidential and Congressional elections, as well as President-Elect Trump’s policy priorities, selection of key advisers and publicly-announced nominees to fill executive branch positions. They also discussed relationships between President-Elect Trump and the U.S. Congress and potential impacts on the internet and the tech industry.

The one-hour meeting passed quickly as many topics were vigorously discussed. 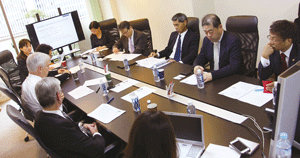 Thank you to K&L Gates for the great opportunity, and thank you to all the JANE attendees for their participation.