Mr. Takashi Inoue, President and CEO, Next Co., Ltd., and Director of JANE, spoke at one of the breakout sessions at the “Social Innovation Forum” organized by the Nippon Foundation on September 29th. 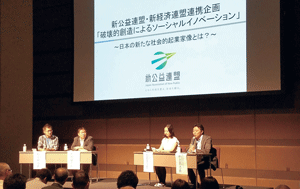 The Social Innovation Forum (held from September 28th to 30th) is a major event designed to boost social innovation and networking in Japan. Representing JANE as a Venture Philanthropy project team member, Mr. Inoue participated as one of the panelists for a session entitled “Social Innovation through Disruptive Creation”, jointly organized by the Japan Association of New Public (an organization for social entrepreneurs) and the Japan Association of New Economy. The other panelists included Shoji Akimoto (Representative Director, G-net), Kensuke Onishi (Chairperson/CEO, Peace Winds Japan), and Mako Yoshioka (Representative Director, Madre Bonita). The panelists talked about how they started their businesses, and Inoue passionately spoke of their vision: ”What we are aiming for is world peace. NEXT is now listed on the first section of the Tokyo Stock Exchange, and we used some of the dividends to launch a foundation to tackle educational and political reforms, and to contribute to the eradication of world poverty.”

Inoue also underlined his determination to advocate for a reform in Japan’s public-interest corporation system through the activities of JANE, since his effort to turn his Next Wisdom Foundation (a general incorporated foundation) into a public interest incorporated association was once hampered by the lack of understanding on the part of the government.

The breakout session attracted a large audience of nearly 300 people, and the panelists engaged in a lively debate on how to bring about social innovations and how one can become a social innovator.