In response to the Fair Trade Commission’s call for public comments, JANE issued its views on the points indicated in the report of the Anti-Monopoly Act Study Group on June 30th.

Original comments are available in Japanese 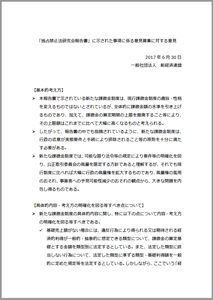 【Summary of our views】

1. The new administrative fine system contains serious problems as it may result in overall raising of the amount of fines and could lead to government abuse of discretion as well as reduced foreseeability to business operators

3. Leniency program should be expanded to cover not just unreasonable trading restrictions but also private monopoly and unfair trading practices.

4. In order to ensure appropriate procedures are followed with business operators suspected of violations, granting of attorney-client privilege should not be restricted to limited circumstances, and audio and video recording as well as the presence of a lawyer should be allowed during depositions.